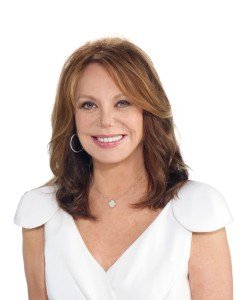 Marlo Thomas is the recipient of the Invisible Disabilities Association’s 2013 Healthcare Honors Award. The Awards Night will take place on October 24th in Denver, Colorado.

As an actress, producer, author and social activist, Marlo Thomas continues to create meaningful and successful projects within all areas of the culture and entertainment community. She has been honored with four Emmys, nine Emmy nominations, a Golden Globe, the George Foster Peabody Award, the Grammy, the Helen Caldicott Award for Nuclear Disarmament, the Thomas Paine Award from the ACLU, and has been inducted into the Broadcasting and Cable Hall of Fame.

Marlo burst onto the scene in television’s That Girl, which broke new ground for independent women everywhere, and which she also conceived and produced. Her pioneering spirit continued with her creation of Free to Be…You and Me, a children’s project that became a platinum album, best-selling book, Emmy Award-winning television special and a stage show.

Throughout it all, she has remained a constant presence on television (most recently, The New Normal) and in theatre, including her critically acclaimed 2012 performance on Broadway in Elaine May’s comedy-drama, Relatively Speaking.

Marlo’s six bestselling books include Free to Be You and Me, Free to Be a Family, The Right Words at the Right Time (Volumes 1 and 2), Thanks and Giving: All Year Long (which became a Grammy-winning CD) and her memoir, Growing Up Laughing: My Story and the Story of Funny. Royalties from both Right Words books and Thanks and Giving benefit St. Jude Children’s Research Hospital.

In 2010, Marlo launched her own website, MarloThomas.com, in partnership with AOL and The Huffington Post. Her ongoing social conscience led her, in 2011, to launch a bullying prevention campaign on her website, which helped spearhead a nationwide anti-bullying initiative in partnership with, among others, the Ad Council, AOL, Facebook, and the U.S. Departments of Education and Health and Human Services.

These and other activist efforts have earned her honors from a host of worldwide organizations, including the William Kunstler Racial Justice Award, the National Civil Rights Museum Freedom Award, the Jefferson Award for Public Service, the NAACP Pathway to Excellence Award, the American Women in Radio and Television Satellite Award, the American Cancer Society Humanitarian Award, and the Castle Connolly National Health Leadership Award.

Marlo is the National Outreach Director for St. Jude Children’s Research Hospital, which her father founded in 1962. She is the driving force behind countless public awareness efforts to educate the public about the landmark and life-saving work being done every day at St. Jude—work that impacts the lives of children in communities across America and around the world. Her personal direct-mail campaigns and television specials have reached hundreds of millions of people across the country.

For Thanks and Giving, Marlo meets with CEOs of major corporations across the country to enlist their support. Today, more than 60 name brands participate in Thanks and Giving, including Kmart, CVS/pharmacy, Ann Taylor, Dick’s Sporting Goods, Kay Jewelers, Williams-Sonoma, Target, Domino’s Pizza, GNC, HomeGoods, New York and Company, Claire’s, AutoZone and many others. Marlo has also recruited movie theatre chains — including Regal, Cinemark — to join the campaign; and she has enlisted some of the nation’s most beloved celebrities to donate their time for special TV spots and movie trailers, including: Jennifer Aniston, Robin Williams, Sofia Vergara, Michael Strahan and Shaun White. These and other efforts have helped Marlo and her family carry on the life’s work of their father, whose example continues to inspire the conviction that every child has a birthright to good health care.

Marlo lives in New York with her husband, Phil Donahue.