Aaron LaPedis has been selected to be the 2016 recipient of the Invisible Disabilities Association’s Volunteer Award. He has been chosen based upon his lifelong passionate volunteerism with multiple charities serving people impacted by illness and disability, while experiencing it within his own family. By using his talent, platform and treasures, Aaron has been able to positively impact numerous charities such as the ALS Association, ARC of Colorado, the Autism  Society, the American Heart Association and the National MS Society to name a few.

Aaron is considered one of the world’s great collectors and treasure hunters. Owner of Fascination St. Fine Art Gallery with an interest in fine art and memorabilia, Aaron is often called upon by the FBI for his expertise in various fields. The second edition of his award-winning book, The Garage Sale Millionaire was recently released in a revised, hardcover edition published by Wiley. 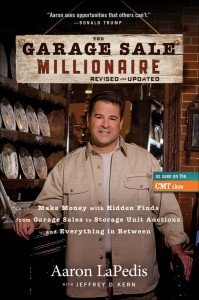 Aaron was the host of Collect This!, Public Broadcasting System’s (PBS) seven-year, #1 rated show in Denver, Colorado. His show reached 100,000 viewers every weekend within the state of Colorado as well as 1.5 million viewers nationally each month. LaPedis successfully taped more than 50 half-hour segments focusing on the diverse world of collecting. Some of the varied topics discussed include coins, wine, art, animation and sports memorabilia. Aaron’s expertise on these subjects has made him an extremely popular and sought-after public speaker. His thoroughly personable and informative style educates his audiences in the many ways of becoming a successful collector and treasure hunter.

Aaron’s expert credentials do not just stop with his PBS show. He has been interviewed by network television and radio as well as having been featured in books, newspapers and magazines. The Discovery Channel produced a half-hour show on Aaron’s numerous and detailed collections and called on his expertise when filming their television special, What’s America Worth, hosted by Donald Trump. Entrepreneur Magazine highlighted Aaron’s success as a master collector and successful entrepreneur. Aaron is also a columnist for The Denver Post and has written for The Denver Business Journal. He has hosted a weekly four-minute segment on the local Denver ABC affiliate, KMGH, called The Collectibles Guy and is a monthly guest on the top rated radio program Money 101 with Bob McCormick. Most recently, Aaron was featured on Hallmark Channel’s Home and Family, hosted by Mark Steines. He has also just recently appeared on Yahoo.com, increasing his total number of front page appearances to three.