An All Natural Crown 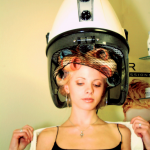 I colored my hair for the first time on my 40th birthday. I only had a few strands of gray, but it was a fun home experiment. I loved the new look and stayed with it for the next 10 years. My world began to crumble soon after my 50th birthday. So did my hair coloring habit.

One influential factor was the book Going Gray by Anne Kreamer. In it she documents her transformation from treated hair to all-natural. I was inspired by her story but resisted the idea. I told myself I couldn’t do it, at least not at that point. Besides, my poor first grader couldn’t be the only child in his class with a gray-haired mother.

By my 51st birthday our world was turned upside down. It was the year of our major exposure and most of that year was spent in doctors’ offices, emergency rooms, and hospitals. My interest in maintaining my coloring habit waned.

I talked with my hair stylist about changing my color gradually. We agreed to do some lighter highlights to make the transition.

Two months after this decision we vacated our house. My world collapsed. My children were sick. I could find no medical help and I began to realize that I, too, was ill. I stopped seeing my stylist and let my hair go.

We moved to Arizona that winter, and after three months of house- and hotel-hopping we settled in a tiny three-bedroom house. Brushing my hair became a luxury; highlighting was out of the question. As reality set in and I understood that we were just beginning a very long recovery process, I cut my hair as short as possible. All the highlights were finally gone and only natural hair color remained.

I didn’t like the new look, mostly because of the shortness of the cut. But the gray wasn’t as unsettling as I thought it would be. My family was supportive.

I did love the new feeling of freedom. No more counting the days till the roots appeared again!

I bought a box of Henna, a natural, chemical-free hair color alternative, but decided to keep my new “carefree” life.

It’s been two and half years since I took the plunge. Time enough to reflect on my goals.

Looking younger than my age is no longer one of them.

Not that I’m totally comfortable with the aging process. Nor have I conquered all of my appearance issues. But I am learning, ever so slowly and painfully, what really counts in life.

And it’s not keeping my hair dark.

It’s not possessions, either. Or wealth.

I like the perspective the book of Proverbs offers,

“Gray-headedness is a crown of beauty when it is found in the way of righteousness.” (Proverbs 16:31)

IDA on Disability.gov – But You LOOK Good! Climbing the Mountain of Weakness