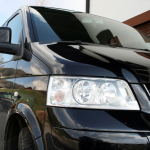 When we left our home in October 2008, we brought our cars. We didn’t have much choice. In retrospect I might have agreed to borrow a car until we could figure out a course of action, but we were consumed with finding shelter and replacing necessities.

We vacuumed and wiped them with white vinegar.

Within a couple of weeks we noticed that our symptoms increased when we rode in our 9-passenger Suburban. My worry about cross-contamination increased as well.

In the end we discovered we hadn’t cross-contaminated. According to testing performed later, the cars were clean. But our symptoms were heightened when riding in the Suburban. We simply had to replace it. Most people could tolerate the car just fine, so 6 weeks after we left our home we traded it for a used Honda Odyssey with leather seats. That car felt better. Our headaches and congestion improved. We kept our second car, a Honda CR-V, and tried to use it as little as possible.

In December 2008, I traveled to Arizona with several of our children. Slowly the rest of the family followed. Our three oldest daughters relocated, then our high school senior, Ryan. Four vehicles came with them.

We noticed adverse reactions when riding in any of our old cars. Our multiple chemical sensitivity kicked in shortly after vacating our home. Therefore, any air fresheners or chemicals previously used were no longer tolerated.

We found ways to cope with our older vehicles. Regular HEPA vacuuming helped, and so did wiping down the inside with *tea tree oil and other essential oils. Changing cabin filters might have helped. Here’s what one allergy-friendly website says about cabin filters:

What is a car cabin air filter?

Many car owners don’t even realize that such a part exists in their vehicles, much less if it ever needs to be changed. But, no matter if they know it or not, a cabin air filter is an essential part of your car’s ventilation system that removes pollutants from the air before they get inside the passenger compartment. They were originally designed to remove solid contaminants like dust and soot from circulating inside your vehicle, but can now also absorb gases and odors. Cabin air filters may also be known as passenger compartment filters, interior ventilation filters, pollen filters or dust filters.

Why are the cabin air filters used?

It is an undisputed fact that roadways (especially major highways, especially during rush hours) are some of the major sources of air pollution. Therefore, as you are driving, you are forced to breathe the air tainted with exhaust fumes, dust and soot particles, many of which may pose a serious hazard to your health.

The cabin air filter is there to prevent all those pollutants from entering the passenger compartment.

Why and how often should you change the cabin air filter?

Eventually, a cabin air filter starts to lose its effectiveness, as it gets dirty with use. This may result in unpleasant odor, and decreased heating and air conditioning performance caused by restricted airflow through the filter.

It is recommended to replace the cabin air filter at least once a year or every 12,000 to 15,000 miles – more often if your vehicle is operated primarily in areas of heavy pollution or dusty conditions.

Cabin air filters are typically located under a vehicle’s dashboard or attached to the glove box. Others may be located in the engine compartment. In nearly all cases, cabin air filters can be changed in as little as 10 minutes.

For instructions on replacing the cabin air filter on a particular car model, go to the Car Cabin Air Filters Main Page and find your vehicle under the appropriate category.

Despite all of the filtration options, it was clear that we needed to replace our vehicles. It took more than two years.

Yesterday afternoon we sold the last car from Colorado. It’s been a slow, arduous process. Finding affordable, used cars with no history of air fresheners, chemicals, or mold has not been easy.

The sale of this last vehicle marks the end of a chapter. The old life is slowly passing. Somehow it also feels like a new beginning.

*Please note that many with chemical sensitivities also react to essential oils and/or vinegar. Seek advice from your medical professional before trying any new products or tips and use with your own discretion.