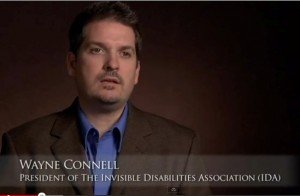 This film “brings light to the most misunderstood and prevalent wounds of war” (MultiWriters). It interviews many amazing warriors who have experienced invisible injuries such as PTSD and traumatic brain injury. Connell shares about invisible disabilities and how the “invisible-ness” can tend to make people not believe that the illness, injury or disability is real.

Let us remember those who serve and who have served. May we also give time, efforts, love and understanding to those who have come home to a whole new battle with injuries, PTSD and/or TBI.

Until Tuesday: The March of Advocacy
Much of this video was filmed at the 2011 IDA Awards Banquet.
Copyrighted © 2011 by Montalván & Associates, LLC.
Luis Carlos Montalván, New York Times Bestselling Author of Until Tuesday.

ABOUT THE INVISIBLE DISABILITIES ASSOCIATION

The Invisible Disabilities Association (IDA) is a non-profit organization that has been encouraging, educating and connecting people and organizations touched by invisible disabilities around the world since 1997. IDA provides awareness, articles, pamphlets, booklets, radio interviews, videos, seminars, events, resources, an online social network and much more.