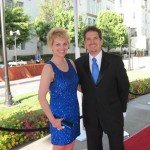 IDA Founder and President, Wayne Connell and Advisory Board Member, Margaret Ferrante, MD attended the 2011 Voice Awards at the Paramount Studios in Hollywood on August 24, 2011.

The awards are sponsored by SAMSHA, the Substance Abuse and Mental Health Services Administration. “SAMHSA is a public health agency within the Department of Health and Human Services. Its mission is to reduce the impact of substance abuse and mental illness on America’s communities” (Voice Awards Press Release).

“SAMHSA is pleased to recognize leaders in the entertainment industry for featuring the strength, bravery, and resilience of people living with mental and substance use disorders. The remarkable production

Wayne and Dr. Margaret attended in support of SAMHSA and the Voice Award Recipients,

including Fmr Captain Luis Carlos Montalván. Montalván is the Guest Speaker for the 2011 IDA Honor Awards Banquet and a bestselling author living with PTSD and Traumatic Brain Injury. They also went to spread the word about invisible disabilities and IDA to attendees, award recipients and celebrities.

See where else the IDA Team has gone Out and About to create awareness, better understanding and support for people living with debilitating conditions.