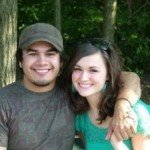 26-year-old Chris Medina auditioned for American Idol in Milwaukee, which aired on Wednesday January, 26, 2011. Before Chris sang, he moved the judges and America to tears with his story. (Photo of Chris Medina and Juliana Ramos before the accident – from their Facebook page).

Two years ago Chris proposed to Juliana Ramos, his girlfriend of eight years. Just two months before the wedding, Juliana was in a serious car accident that left her in a coma.

The doctors told the family she had suffered a traumatic brain injury (TBI), several fractures to her face and they did not think she would wake.

“Her chances of surviving through the night were in doubt and it was much too soon to speculate about her prospects for a full recovery” posted the Laurus Foundation, an organization assisting in raising funds for Juliana’s medical bills.

Miraculously, Juliana came out of the coma and was reunited with Chris, her family and her friends. Chris has continued to stand by her side to help care for Juliana. During Chris’ American Idol audition promotional package, Chris said:

“I was about to make vows just two months from the accident. Through thick and thin … till death do us part … in sickness and in health … for better or for worse.” He continued, “What kind of guy would I be if I walked out when she needed me the most?”

Chris then continued with his audition with a very emotional and heartfelt song, “Breakeven” that seemed to express Chris’ journey during this very difficult time with the love of his life.

The judges were so taken by his story, that they asked him to go get Juliana, then quickly ran up to greet her when she entered the room. Steven Tyler bent over, gave her a kiss and affectionately told her Chris sings so good “because he sings to you.” After the judges introduced themselves, they exclaimed that Chris was “going to Hollywood!” and the entire family rejoiced!

Our hats are off to this young man who refuses to walk away from his fiance who is now living with TBI. Sadly, many spouses often leave the marriage when debilitating illness or injury enters their lives. Since they hadn’t married yet, Chris could have easily chosen to step out.

Chris and Juliana have a very long road ahead, as they face continued rehabilitation, extensive therapies and surgeries. It won’t be easy, but they have the support of friends and family – something everyone living with a disabling condition needs.

2/17/11 UPDATE: Chris  moved on to the final round in Hollywood which will determine if he will be in the top 24.

What Has Become of Me? Video and song by Chris Medina the day they were supposed to be married.

Where to Begin: Finding Help During Chronic Illness Living with Asperger’s and Tourette’s: James Durbin Contestant on ‘American Idol’