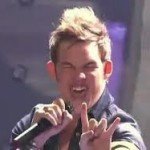 James’ back-story told of his long, life journey of struggles. James’ father was a bass player and spent much of his time out on the road, playing in bands. When James was only nine, he lost his father to a drug overdose. James teared up when he said, “It hurt to lose him, cuz I didn’t get a chance to know him.”

After his father’s death, James was on medication for a sleep disorder and stress. He went to Stanford Medical Center, where he was diagnosed with Tourette’s and Asperger’s Syndrome (a high functioning form of Autism). James continued, “As I was getting older, at school people would tell me, ‘Cut that out!’ ‘Stop that!’ – I can’t!” … “I always got made fun of, beat up. I was just LOST.” 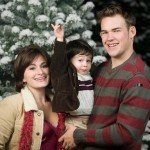 Then James lit up when he began to talk about his fiance, Heidi. James smiled and said, “In the middle of it all, I met an angel.” … “Heidi’s just changed my life SO much!”

James and Heidi have a beautiful son, Hunter, and had been struggling to get by each day.  He had recently been laid off from his job, before the auditions. The American Idol opportunity is more than just a dream for James and his new family.

At first, James seemed concerned about the Tourette’s, getting in front of the judges and letting his nerves take over. After he finished his song, Jennifer Lopez remarked, “You go away when you sing.” James replied, “I do. When I was younger, I was diagnosed with Tourette’s. When I sing, it just all goes away, like I don’t have a care in the world.”

Randy Jackson jumped in to say, “I like your voice. I like your range.” Steven Tyler added, “Wow, that was OVER the top!” All of the judges were happy to give James a “golden ticket” to Hollywood!

Since then, James has continued to soar through Hollywood week to the Top 13 and beyond! See all the latest updates, videos and more resources below! What’s more James has already become an idol for those living with Tourette’s and Asperger’s. He has brought awareness and hope to children, adults, parents and loved ones around the world!

WHAT IS JAMES UP TO NOW?

UPDATE 4/6/12: James released his album, Memories of a Beautiful Disaster, on November 2011. He and his longtime girlfriend and mother of their child, Hunter, were married on New Years Eve 2012. The ceremony was on the edge of a California redwood forest and Hunter was the ring bearer. Fellow ‘American Idol’ contestants from Season 10 Casey Abrams, Haley Reinhart and Stefano Langone also attended.

James is not only enjoying a career doing what he loves, but he continues to bring about awareness and support of Tourette’s and Asperger’s. James encourages those living with these conditions to keep dreaming and keep pursuing their goals, despite their challenges. James shares his own personal struggles with being teased as a child and how others can believe in themselves. As a result, James brings a message of anti-bullying.

At a WWE rally in March of 2012, James was asked to sing impromptu and he was amazing (James Durbin Official Site). When speaking to hundreds of Miami-Dade sixth graders:

“James  shared his emotional personal story of being bullied while in school — and how, after he took action and reported the bullying to school officials, the bully would come back months later… to apologize” (mjsbigblog).

In light of James’ fight against bullying and mistreatment of kids by other kids, James is asking all of his fans and those who stand behind his message to help him “trend” the hash-tag, #outcastarmy on Twitter.

Thank you, James, for continuing to give hope and inspiration to children, adults, parents and teachers! You have a passion and a gift that is being used to make this world a better place!

5/12/2011 FINAL American Idol UPDATE: America is Stunned! James Durbin did not make it into the final 3 tonight. This was the week that rocker Chris Daughtry went home. Either the voters preferred the other contestants or they thought he would surely be safe and get plenty of votes and so they voted for someone else. The American Idol Website says, “After 72 million votes, in one of the most surprising results in the history of American Idol, we said goodbye to James Durbin.”

James seemed very disappointed, but quickly mouthed the words, “It’s OKAY!” to Heidi who was in the audience. His Goodbye Performance was very touching, as he and Heidi embraced then tears rolled down his face. James, we will miss you on American Idol, but we were surely see you around!

5/11/2011 UPDATE: It was Leiber & Stoller night. James opened the show with a timeless tune from Journey, “Don’t Stop Believing.” Of course, Randy Jackson, being a former Journey band member was thrilled. The rest of the judges and audience loved it as well. Later, he closed the show with The Searchers’ hit, “Love Potion #9.”

5/2011 UPDATE: James advanced to the Top 4. Tonight they showed just the bottom 2, which were Jacob Lusk and Lauren Alaina. Jacob Lusk was sent home.

5/4/2011 UPDATE: Everyone in the Top 5 sang 2 songs. James’ first song was an upbeat tune, “Closer to the Edge.” His second song was a very emotionally delivered Badfinger’s tune, “Without You.” James struggled to get through the song in rehearsal, because the lyrics made him think of Heidi and Hunter when they would visit him, then have to leave and how much he misses them.

21/2011 UPDATE: James advanced to the Top 6. This week he brought out the contemporary alternative song, “Uprising,” delivered with pizazz. Stephano was the one who went home this week. Stefano was in the bottom 3 with Haley Haley Reinhart and Jacob Lusk. James and Scotty McCreery have yet to be in the bottom 3.

4/14/2011 UPDATE: James advanced to the Top 7. Paul McDonald was sent home. Stefano Langone and Haley Reinhart were in the bottom 3 wtih him.

4/7/2011 UPDATE: James advanced to the Top 8. Pia Toscano was sent home. Stefano Langone and Jacob Lusk were in the bottom 3 with her. James and Scotty McCreery have yet to be in the bottom 3.

3/31/2011 UPDATE: James advanced to the top 9. Naima Adedapo and Thia Megia were both sent home. Paul McDonald was in the bottom 3 with them.

3/24/2011 UPDATE: Casey Abrams had least votes, but the judges kept him with their only SAVE of the season. All 11 will go on tour. Two will be cut next week. Stephano Langone and Thia Megia were in the bottom 3 with Casey.

2/17/11 UPDATE: James moved on to the final round in Hollywood to determine if he will be in the top 24.

James Durbin Hollywood Week, Group Performance of “Somebody to Love.”

James Durbin When He Was 19 Singing “While My Guitar Gently Weeps.”

Faces From the Spectrum: James Durbin

Invisible Challenges with Autism (and other developmental differences).

James Durbin Top 6 – Song: “Will You Still Love Me Tomorrow?”

Recap of Top 7 Performances: Music of the 21st Century