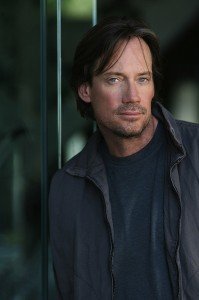 Kevin Sorbo is the recipient of the Invisible Disabilities Association’s 2013 Inspiration Honors Award. Kevin was chosen based upon his inspiration as a three time stroke survivor. Kevin’s journey with illness chronicled in his book, “True Strength” provides amazing insight and vulnerability into personally living each day with illness, both the times of tragedy and of triumph.

As a strong leading man and a hunky Half-God, Kevin Sorbo brings a refreshing cadence to Hollywood.  Growing up in Mound, Minnesota, a western suburb of Minneapolis, the “Sorbs” excelled at football, baseball, basketball, and golf, but his passion was always with the theater.  After studying marketing and advertising at Moorhead State University and the University of Minnesota, Kevin joined an actors theater group in Dallas, Texas before traveling to Europe for 3 ½ years and another 6 months in Sydney, Australia, where he enrolled in theater courses and modeled for print ads and appeared in over 50 commercials.  When he returned to the States, Kevin settled in Los Angeles where he studied acting with Bill Traylor at the Loft Studios, Janet Alhanti,  Richard Brander,  and Roy London. Sorbo shot over 150 commercials and began making prime time appearances on shows such as  “Dallas”, “The Commish”,  and “Murder She Wrote”.

Kevin received international stardom as Hercules on the hit TV series, “Hercules, the Legendary Journeys “ (1993-2000).  After the success of the initial five, two-hour movies the series exploded onto the mainstream, airing in 176 countries and surpassing rating-topper “Baywatch” as the most watched TV show in the world.  Sorbo also directed two episodes and co-wrote one installment of the Hercules.

As season seven of Hercules was ending, Sorbo signed with the Tribune Company and went on to star in the lead role of Captain Dylan Hunt in Gene Roddenberry’s, Andromeda.  The series was created by Gene Roddenberry off the heels of Star Trek in 1969 and revived in 2000.  Andromeda debuted as the number one, hour-long show in first run syndication and remained at number one for its entire run from 2000-2005.

In 1996, on a hiatus from Hercules, Sorbo starred in the feature film Kull, the Conqueror. “Kull was the prequel to Conan the Barbarian.  That was followed by Walking Tall, the Payback and Walking Tall, Lone Justice, both released on Sony DVD. Other popular credits are Lifetime Channel’s Last Chance Café, and Hallmark’s third highest rated film, the western Avenging Angel.  Sorbo is most recently recognized for his roles in The Santa Suit (2010), Meet the Spartans (2008), Fire From Below (2009), Lightning Strikes (2009), Prairie Fever (2008), Flesh Wounds (2011), and Paradox (2011). In 2010, Sorbo played “Pierluigi” in the Australian comedy, The King of Mykonos, which debuted in Australia at number one. Sorbo has since played opposite Kristy Swanson and John Ratzenberger in the independent film “What If”, which premiered in August of 2010. The film remained in theaters for 5 months on strong word of mouth and was nominated for Best Family Movie of the Year 2011 by the Movie Guide Awards. Sorbo himself received the Movie Guide Award for Most Inspirational Performance of the Year for his portrayal of Ben Walker.

In between all that shooting, Sorbo also guest starred on a number of sitcoms.  Those included “Just Shoot Me”, “Cybill”, “Two and a Half Men”, “Dharma and Greg”, “According to Jim”, “Gary Unmarried”, and “Don’t Talk to the B#@*& in Apartment 23”.

In 2011, Sorbo stared alongside Dennis Quaid, Helen Hunt and Carrie Underwood in Soul Surfer, the inspiring true story of teen surfer Bethany Hamilton who lost her left arm in a shark attack.  Also set to release on the big screen in 2013 is Julia X, a 3D psychological thriller.  Other movies include The Coffin, Sam Steele: The Silver Chalice, Single in South Beach, Avarice and two comedies: Poolboy : Drowning out the Fury, and FDR:  American Badass, and “The Santa Suit”.    GMC cable  released “A Christmas Angel” in November of 2012.  Another Sony Studio release in January,  2013 is  “Abel’s Field” which is a modern day Cain and Abel tale set in the world of Texas High School football.  Sorbo shot another western for Hallmark, “Shadow On the Mesa”, airing in the spring of 2013 and just completed filming on a Pure Flix movie, “God’s Not Dead” for release in the fall of 2013.

Kevin has had the pleasure of starring in many guest spot appearances on TV shows, such as “Hawaii 5-0”, “Hope & Faith”, and USA Network’s “Psych”, with recurring appearances on “Dharma & Greg” and “The OC”.

Kevin has just released his memoir, “True Strength: My Journey From Hercules to Mere Mortal and How Nearly Dying Saved My Life”.   The book chronicles his near death experience in 1997 at the end of season 5 on Hercules.  Suffering three strokes and the battle to gain back his life.  It is an honest account of celebrity, personal tragedy, and the power of letting go.  It is a book for anyone who suffers a setback in life and is struggling to find a way to move on.  In 2013 Sorbo received the Public Leadership in Neurology Award from the American Brain Foundation and American Academy of Neurology for his work in bringing stroke awareness to an international level.

In real life, Kevin leads “A World Fit for Kids”, a successful mentoring model that trains inner-city teens to become positive role models school, fitness, sports, and uses them to mentor younger children. In 2005, the program was awarded the Governor’s Gold Star for the most successful after-school program in the state of California.  In 2003, Kevin was also named national spokesperson, successor to Arnold Schwarzenegger, for the Afterschool Alliance; a non-profit organization working to ensure that all children have access to safe, enriching afterschool programs.