Huntington Potter PhD has been selected to be the 2015 recipient of the Invisible Disabilities Association’s Research Award. Dr. Potter has been chosen for his cutting edge research with Alzheimer’s and Down Syndrome and the relationship between the two. Dr Potter’s leadership in this research is exemplified through his positions as Director of Alzheimer’s Research at the Linda Crnic Institute for Down Syndrome and the University of Colorado School of Medicine’s Department of Neurology.

Dr. Huntington Potter is Professor of Neurology, member of the Linda Crnic Center for Down Syndrome and Director of the Rocky Mountain Alzheimer’s Disease Center at the University of Colorado Anschutz Medical Campus. He is devoted to studying the mechanistic relationship between Alzheimer’s Disease and Down syndrome. Recognizing that these disorders are two sides of the same coin and studying them together will best hasten the development of new treatments for both.

Alzheimer’s Disease. He designed and directed the NIA-designated Florida Alzheimer’s Disease Research Center at USF and was elected President of the Faculty at the College of Medicine, and President of the USF Tampa Faculty Senate.  From 2004-2008, he was CEO and Scientific Director of the Johnnie B. Byrd Sr. Alzheimer’s Center & Research Institute, during which time the Institute built the largest free-standing Alzheimer’s disease research institute in the world and developed 7 new treatments for Alzheimer’s disease in preparation for human trials, before joining UC Denver.

Dr. Potter is credited with the first demonstration of the Holliday intermediate in genetic recombination, the perfection of electroporation for gene transfer, and the co-discovery of the essential role of inflammation and the amyloid-promoting activity of the apoE-4 protein in Alzheimer’s disease. He also discovered that Alzheimer’s disease and Down syndrome, which invariably leads to Alzheimer’s by age 30-40, are mechanistically related to 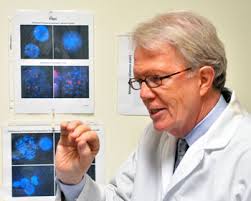 each other and to cancer through the development of cells with abnormal numbers of chromosomes, which will be the focus of his research at UC Denver. He is author of over 100 scientific articles and books, is the holder of 15 U.S. and foreign patents, has sat on scientific advisory and review committees in academia, industry and government, and has received numerous awards for his work.  In 2010, Dr. Potter was elected a Fellow of the American Association for the Advancement of Science, in 2012 was elected a Founding Fellow of the National Academy of Inventors, and was selected one of Colorado’s Top Thinkers of 2013 by the Denver Post.  His electron micrographs of DNA are on permanent exhibit in the National American History Museum of the Smithsonian Institute in Washington D.C.