Hazel Miller has been selected to be the 2016 recipient of the Invisible Disabilities Association’s Invisible No More Perseverance Award. Hazel has been chosen based upon her perseverance and strength as she lives daily with Diabetes. Thank you Hazel for making a positive difference in the lives of others with diabetes by being willing to use your platform as a performer to share your personal diabetes journey.

Hazel is not just a great singer; “She is a force of nature!” quotes the Rocky Mountain News. Her voice has been called “stunning, moving and powerful.” Hazel has been a sought after performer in Colorado for the past 30 years. The Hazel Miller Band, HMB was formed more than 2 decades ago.  HMB performs an eclectic blend of Jazz, R&B, Blues and original music. Hazel Miller Band’s music is designed to make the audience dance and sing-along.  They play music that excites and involves the listener.

The first highlight of 2015 was Hazel’s singing of the national anthem at the inauguration of Colorado Governor John Hickenlooper, January, 13, 2015.  Later on that night the Governor’s Inaugural Concert featured the Lumineers, String Cheese Incident and Big Head Todd and the Monsters with Hazel.  She performed at the FIS Alpine Ski Championships in Beaver Creek, Colorado on February 15, 2015; with an estimated international television audience of 180,000,000 viewers.  Hazel has even been chosen to record a welcome greeting for visitors taking the trains to the main terminal at Denver International Airport.

In the Winter of 2014, Hazel toured with Big Head Todd and the Monsters.  They toured the entire country with great response from audiences. She had a great summer, 2014, of festival appearances in Grand Junction, Del Norte, Pagosa Springs, Frisco, Breckenridge, Erie, Boulder, Telluride, Mississippi, New Mexico and Wyoming.  HMB has appeared many times at the historic Red Rocks Amphitheater as the head liner and as an opener. Hazel has appeared as a special guest of Big Head Todd and the Monsters for more than 19 years.  2015 marked HMB’s second appearance as the opener for The Botanic Gardens Music Series.  Summer 2013 they opened for Al Green and 2014 had them opening for Michael McDonald at the Botanic Gardens in Denver. 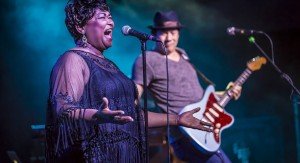 Hazel’s music can be heard on many local Colorado radio stations KOA, KBCO, KUVO, KRFC, KOTO and KCNU.  Nationally, Sirius Radio and XM Radio are playing her music on the “Real Jazz” and “B. B. King’s” Blues stations.  Mark Ruffin, on “Real Jazz” XM Radio added Hazel to the lineup fall of 2010 and she continues to be a requested performer on radio stations nationally for example:  Martha’s Vineyard, Charlotte, Miami and Chicago.   She sang on 6 tracks of the hit 2014 CD Blues Masters 3.  This CD featured Mickey Thomas from Jefferson Starship and Tim Tucker, executive producer and lead guitarist on the CD.  The reviews said this about Hazel’s vocal performance: “Miller’s vocals would rival Koko Taylor”.  The CD is recognized as The Blues CD sleep of 2014.