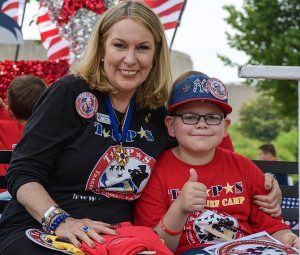 Major Bonnie Carroll (Ret) has been selected to be the 2020 recipient of the Invisible Disabilities® Association’s Invisible Heroes® Award. Bonnie has been chosen based upon her incredible leadership and personal vulnerability as the President and Founder of the Tragedy Assistance Program for Survivors (TAPS). As a veteran herself and a surviving spouse of a veteran, through her great loss and because of her great compassion, Bonnie has created an amazing organization providing comfort, care and resources to all those grieving the death of a military loved one.

Bonnie founded TAPS in 1994, at a time when there was no national support network for the families of America’s fallen heroes. Through her own loss of her husband, Brig. Gen. Tom Carroll, who perished in an Army plane crash in 1992 along with seven other soldiers, she turned her tragedy into a purposeful effort to create what is today the major national program providing compassionate care for all who are grieving the death of a service member. 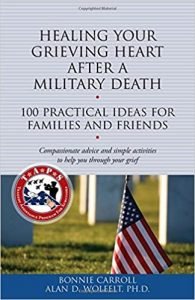 Since its launch in 1994, TAPS has cared for the more than 100,000 surviving family members through a national network of peer-based emotional support services; a 24/7 helpline available to those grieving a loss; connections to community based care throughout the nation; and casework assistance for families navigating all of the resources and benefits available to them.

In addition to founding and serving as the President of TAPS, Bonnie also held appointments in the government, including White House Liaison at the Department of Veterans Affairs (VA) under President George W. Bush, Executive Assistant to the President for Cabinet Affairs under President Reagan, and in Baghdad, Iraq, as the Deputy Senior Advisor for Programs in the Ministry of Communications. During her earlier career in Washington, D.C., Bonnie lived and worked on Capitol Hill as a political consultant on Presidential and Congressional campaigns and consultant on national defense issues.

Bonnie retired as a Major in the Air Force Reserve, where her career included service as Chief, Casualty Operations, HQ USAF. Prior to joining the USAFR, Bonnie served 16 years in the Air National Guard as a Transportation Officer, Logistics Officer, and Executive Officer. 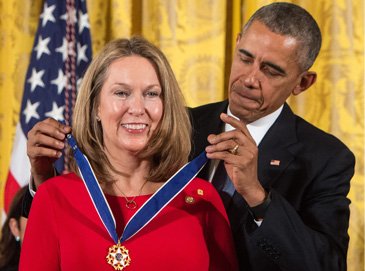 Bonnie has also served on the Board of Directors of the Association of Death Education and Counseling, the Department of Defense Military Family Readiness Council, the VA Advisory Committee on Disability Compensation, Defense Health Board and the Board of the Iraq and Afghanistan Veterans of America and she is past co-chair of the Department of Defense Task Force on the Prevention of Suicide by Members of the Armed Forces. She currently serves on the VA Advisory Committee on Families, Caregivers and Survivors. Co-author of Healing Your Grieving Heart After a Military Death, she has published numerous articles on grief and trauma following a military death.  She has appeared on CNN, FOX, NBC‘s The Today Show, and other national programs speaking about military loss.

In addition to receiving the 2015 Presidential Medal of Freedom from President Barack Obama, Bonnie was featured in People Magazine as a Hero Among Us; was named a recipient of the Community Heroes Award by the Military Officers Association of America; has been recognized by the Defense Department with the Office of the Secretary of Defense Medal for Exceptional Public Service; and has received the Army’s Outstanding Civilian Service Medal and the Navy’s Distinguished Public Service Award.