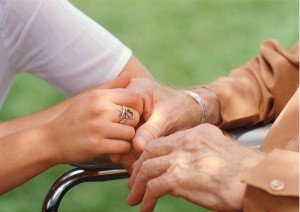 “Why did I decide to found the Invisible Disabilities Association (IDA)?” This question has been posed to me on many occasions. The obvious answer is because of my wife, Sherri. As you may know, Sherri lives daily with progressive multiple sclerosis (MS), chronic Lyme disease, chemical injury and traumatic brain injury, as well as severe pain and bone crushing fatigue. I met Sherri in 1992 at the age of 28 after she was officially diagnosed with MS and Lyme disease. I fell in love not only with her, but also with helping other people who are living with invisible disabilities and pain every day. I wanted to be her champion and theirs, too.

But why care at all? Caring means being a part of someone else’s mess. Caring means moving from “it’s all about me” to “maybe, it is about you, too”. According to Google, the word “care” is both a noun that means “the provision of what is necessary for the health, welfare, maintenance and protection of someone or something,” and a verb that means to “feel concern or interest; attach importance to something.” I think that one shows he cares via kindness in both senses of the word.

Thus, what moved me to launch IDA was my desire to care for others. People who live with an invisible illness oftentimes become part of the shadows. They need, as the above definition states, “health, welfare, maintenance and protection,” because sometimes caring can be hard to come by. For example, my wife once collapsed at a department store and sat in the aisle for more than an hour as people just walked by. No one seemed concerned. Sound crazy? I hear these types of stories quite often.

How can caring impact a person’s health? A recent article in Wired Magazine by author Nathanael Johnson talks about the “Care Effect.”

During a research study led by Ted Kaptchuk at Harvard Medical School, patients with irritable bowel syndrome were told they would be participating in a study of the benefits of acupuncture. One group, which received the treatment from a warm, friendly researcher who asked detailed questions about their lives, did report a reduction in symptoms, equivalent to what might result from any drug on the market. Unbeknownst to them, the researchers used trick needles that didn’t pierce their skin. Now here’s the interesting part – the same sham treatment was given to another group of subjects, but performed brusquely, without conversation. The benefits largely disappeared. Kaptchuk concluded that it was the empathetic exchange between the practitioner and the patient that made the difference.

What Kaptchuk demonstrated is what some medical thinkers have begun to call the “care effect,” that is the idea that the opportunity for patients to feel heard and cared for can improve their health. Kaptchuk’s study was a breakthrough. It showed that randomized, controlled trials could measure the effect of caring. However, there was already abundant evidence from nursing science to suggest a healing power in the interaction between practitioner and patient. A study in Turkey found that empathetic nurses improved the symptoms of patients with hypertension. Midwestern cancer patients who received massages slept better and had less pain.

I have had many discussions with nurses and I asked why they decided to pursue nursing as a profession. Their answer is usually because they care about people, especially those who are sick and in pain. Caring for the invisible is one of the main reason’s both Karyn Buxman, RN, MSN, author of the What So Funny About… book series and Ali Garrett, RN, BSN, the nursing director at Roundup River Ranch joined the IDA team as board members. By showing kindness and care, I believe IDA helps contribute to the health of those we touch through encouragement, education and connection.

At first blush, stories of decency and goodness may seem trivial when compared to the constant stream of bad news that pours forth every day. But it’s just a matter of keeping perspective. For instance, would a story about a group of villagers in India banding together to save a baby elephant stop the poverty and injustices suffered by so many around the world? Of course, it wouldn’t. But it might keep us from throwing in the towel.

Or what about the fast-food employee from North Carolina who turned a young girl’s disastrous prom night into a dream date? That might not turn around the epidemic of bullying facing our youth today, but it goes a long way toward remembering that people are basically kind, and that we look out for each other.

And then there’s the New Hampshire college athlete who gave up his beloved sport — the shot put – in order to save the life of a complete stranger. That might not be the miracle cure for cancer that we’ve all been looking for, but it certainly sends a message that sometimes love and kindness are the most powerful medicines.

While we all should continue to take a deep breath and bear the harder and sadder stories that populate the front pages of our newspapers – and then, try to do something about them – let’s all remember to feed our spirits by seeking out stories about random acts of kindness, as well. Those stories are out there – sometimes you just have to dig a little to find them.

I hope the stories of kindness Marlo mentions are not so random. I think of Dave Dias, IDA 2011 Caregiver Honor’s Award recipient, who takes the time out of his busy schedule as an insurance executive to regularly blog about his wife, Irene, who struggles with illness and injury from a car accident years ago. Dave even took the time to write a book, Irene’s Journey of Faith. Dave is not alone in caring, yet we still have strides to go. I hope we can move from stories to caring becoming a way of life.

The Invisible Disabilities® Association’s mission revolves around care. We care by listening, believing, validating, encouraging, educating and connecting people touched by illness, pain and disability. We show we care by telling the world that people matter even in all of their illness and pain, even when they can barely get out of bed, even when they can’t speak for themselves and even when they must depend on others for their most basic needs.

I love the following quote from leadership guru, John Maxwell: “People don’t care how much you know until they know how much you care.” I care, and I founded IDA for this reason.  At IDA, we care and we believe. We look forward to a world where people living with illness, pain and disability will be Invisible No More®, a world where we all care and believe!

This article was first published on Disability.Blog, by Disability.Gov on August 14, 2013.