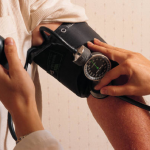 As soon as I was called back into the inner sanctum for my appointment, I knew something was different. This was merely the warm up act. I walked over to the scale. While not exactly a gadget, it was creatively updated.

Ready to step up and onto the scale, I realized there was no need. The floor was cut to accommodate the base of the scale. It was set down in, flush with the floor.

The ease of use was an unexpected treat for those of us dealing with mobility issues.

Explained Joy, my nurse, “Everyone gets a kick out of it. Except some of our older patients. They tend to step up, not realizing there is no step. We’re hoping not to lose someone that way.” Good goal.

Joy was friendly and talkative. After turning around from the scale (which, by the way, needs to be drastically adjusted to calculate correctly…), I was met with a vaguely familiar gizmo, heading toward my ear. Fully expecting the old ‘thermometer in the ear’ trick, this time it went past my ear, and behind it.

One second later, Joy pulled the thermometer back toward her. “99.8.” No nasty inner ear contact going on there. Love that.

We were off and running (ok, slowly meandering) to The Room, all the while, chit chat filling the airspace.

“Finger, please.” This time I was familiar with the device, softly clamping around my finger, probing for medical measurables.

Next, Joy reached for the blood pressure cuff. My standard line: “Ohhh, usually nurses end up using a kid’s cuff on me. The adult size is too big.”

Still struggling to wrap it around my arm, I heard the expected reply: “This isn’t going to fit. I’ll need to get something else.” Excellent idea.

Joy came back with another new device. Not a traditional cuff at all, this ‘bracelet’ cuff (uh huh, like Super Woman – but not gold) fit around my wrist, barely, and sported its own LED display. We both gave it a thumbs up.

The next gizmo needs a drastic update. Not at all the reason for the visit, but a discovered need during the exam, I was readied for my first-ever ear irrigation. After seeing all these high tech electronic tools, I was fully expecting to see something out of Star Trek for this procedure.

I was hugely disappointed. You gotta be kiddin’ me. A squirt bottle, a drip pan, and water? Seriously? What happened to vaporizing lasers? There’s gotta be a better way.

“Ya know, ear candling doesn’t hurt. In fact, it feels good,” I offered.

“We have candles, but we’ve never used them.” Hmmm. I’d have gladly been their guinea pig.

From Space Age to ‘Hey, Fred, let’s discover fire”, I got to experience The Ages all in the span of 30 minutes.

For the next ear cleaning, I’m hoping for a laser gadget – the 2200A Series Super Sonic Wax-Melt-Away Model. Bring it on.