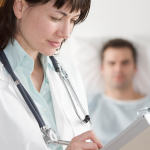 “You’re such a non-compliant patient.”

Words I heard again at yet another medical appointment. I really should be fired sometimes.

The words were said with affection, from a nurse who has become a friend.

Nonetheless, though, she’s right. I am non-compliant. I comply when it suits me, and so often it doesn’t.

I recently saw my neurosurgeon for an annual re-check of a surgery he performed eight years ago. The symptoms that originally brought me to their office were similar to symptoms I once again found myself experiencing.

Numbness and weakness in my right hand were becoming all too constant.

Back then, the numbness was caused by a bone spur stealthily growing into my spinal cord. So the nasty little bugger was cut away and the numbness largely disappeared. Until this year.

I weighed my options: do I bring this symptom to my medical team’s attention and potentially deal with another surgery? I’m really not in the mood for an operation at this time. My calendar is full of plans; surgery is not one of them.

Or do I act the responsible patient and mention this numbness, knowing I might not like the answer I hear?

It seems to be a no-brainer, but it’s not so clear cut when your brain is the one involved.

After some deliberation with myself, the ‘responsible patient’ won the battle.

I hesitantly brought up my symptoms to one of my favorite doc / nurse teams.

We did an in-office exam, we did EMG / NCS testing, we did a follow up appointment.

My nerves were shot, but not from physical causes.

My nurse, Vicki, made the appointments as quickly as she could. And because of her seniority, connections and reputation, when she made requests, things got done. I was humbled and grateful.

Finally, at the followup, my neurosurgeron shared the great news. My nerves were fine!

The likely culprit is four decades of arthritis, causing musculoskeletal issues. Whew! Is that all? I can live with that, especially since my recently increased chiropractor appointments seemed to be lessening the symptoms.

I understand that hand surgery would probably make life easier, as my neurosurgeon suggested. But these old gnarled hands get me through normal daily activities just fine, thank you very much. If and when they no longer do, I’ll consider surgery.

At present, I have no desire to add to my eight-count and growing collection of surgeries. Some operations are non-negotiable: for example, spinal cord bone spurs and orthopedic surgeries needed for walking. Ones that are designed merely to make life easier? Pfft, they’ll have to take a number and wait.

Vicki asked if I planned to contact either of the referrals given to me. No, I’ve got my own calendar to get back to right now.

“You are so non-compliant, Kris. But it’s good. You know how all this works, and you think for yourself.”

Maybe so, maybe to my own detriment sometimes. But hey, as long as there’s options to weigh, I will.

Reprinted with kindly permission from the Journal of Nursing Jocularity.