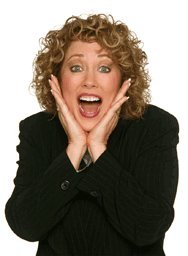 Living with a debilitating condition can be very challenging! Often people struggle with getting through a work day, not being able to work at all, trying to clean the house or make a meal, shopping for simple things such as groceries, being faced with medical bills, doctor appointments, insurance claims, medications or even just having the energy to visit with friends and family.

Because it can all be so overwhelming, it is good to take a moment to allow yourself to smile. Whether it is a funny movie or TV show, book, story or just trying to see the humor in a difficult situation, stopping to giggle can help lighten the load.

Come join us as Karyn Buxman, RN, MSN, CSP, CPAE  Hall of Fame Speaker, Nurse and Humorist shares a few heartfelt personal stories of her own. Karyn is the creator of  the Journal of Nursing Jocularity, the President of the Association for Applied and Therapuetic Humor and an IDA Advisory Board Member. Visit Karyn at www.KarynBuxman.com.

Finding Humor in Difficult Times by Karyn Buxman, RN, MSN, CSP, CPAE. Karyn shares her personal stories of illness in her family when one son suddenly had mysterious debilitating migraines, the other son battled cancer and her mom developed alzheimer’s. She brings an insightful and hilarious message about loving others and finding humor in the good and the bad times. Invisible Disabilities Association Advisory Board Member, Karyn Buxman delivers this Amazed and Amused Keynote for the 2009 IDA Honors Banquet. Karyn is a nurse, humorist, author and Hall of Fame Speaker. Order the 2 DVD Set of the entire 2009 Banquet – Coming soon!

A Time to Laugh by Karyn Buxman, RN, MSN, CSP, CPAE. A personal story about her son struggle with an invisible disability.

“If you would just be a little stricter with him, I’m sure he would straighten up.” I stared dumbly into the face of one of Adam’s teachers, after my son had missed almost six months of school from debilitating headaches.

My heart sank. My stomach twisted. This person saw my son in between his headache episodes and saw a typical teenage boy—laughing, teasing, joking around. What she hadn’t witnessed was the tortuous episodes that no doctor was able to diagnose; the painful attacks that began when he was 13 years old, out of the blue. Soon we saw a pattern emerge.The attack would begin with an itching burning sensation on his temple that would last about 30 seconds. This would be immediately followed by a taste in his mouth that he described as “bad bananas,” another 30 seconds. Then he would be hit with an explosive pain across the front of his head that would throw him to the floor, thrashing in pain, pulling his hair, kicking his feet, crying out in agony. This part of the ‘headache’ lasted about 10 minutes and during this time, he was aware of his surroundings but couldn’t hear due to the loud metallic clanging noise that filled his head.

And then, as suddenly as it began, the explosive pain would stop, leaving a heavy dull headache in its place. It was at this point, immediately following the explosive portion of the headache, that Adam would get a tingling sensation on the bottom of his feet, and then he would be paralyzed from the neck down for about 90 minutes. Gradually over an hour and a half, he would regain the use of his hands, then his arms and then finally his feet and legs.

Sometimes the headaches would be weeks, even months apart. At their peak, he might experience 6-8 episodes a day. Adam went from being an enthused and happy student in the gifted program with straight A’s to a depressed and disheartened young man who shared, “My teachers get paid the same whether I pass or not. They don’t care about me.”

Doctors lined up outside his room like kids in a candy store. Everyone wanted to take a crack at this medical mystery. One after another, neurologists would come in and ask him the same series of questions that had been asked time and time again.

At one point, a neurologist came in dragging a tripod and video camera in with him. Adam sat on the bed, legs dangling over the side while the doctor set up the camera, turned it on, and settled into a chair across from Adam. He pulled out his pen, looked down at Adam’s chart and then ceased to make eye contact for the rest of the interview.

Adam and I doubled over with laughter, perhaps a little slap happy from the tedious day of exams. The doctor paused, and then without ever looking up said, “Clever.” While the doctor didn’t seem to benefit from the humor, Adam and I were rejuvenated by the small bit of comic relief.

Indeed humor became such an important coping mechanism for Adam that, six years later, he went on to school in Chicago to study with Second City. He has incorporated the art of Improv into his personal and professional life. Humor was not, is not, the be-all-end-all, for us. There was time for laughter; there was a time for tears. Both are healing. But we found that it’s much less upsetting to those around us if we laugh, rather than cry.

When one is in pain, it is sometimes hard to believe that humor is available. Yet it is there, just as the stars are there during the day—we cannot see them when we are blinded by the light that keeps them hidden from us. We trust that they are there and will become evident to us again, when the time is right.

Making it work. Here are some techniques for transforming your life with humor and laughter.

RETURN TO TOP OF PAGE