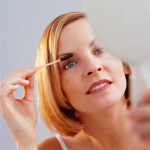 Diane said, “It was startling to learn a number today. A hundred and twenty is the answer. 120 chemicals in care products, creams, shampoos, used everyday by women – most of them untested an a lot by men as well. Today, even lawmakers said it was time for a wake-up call …” (ABC World News, 4/30/12).

The report gave a small example of problematic chemicals such as formaldehye, dioxane, lead, parabens, mercury, toluene, diethyl phthalate (allergies, hormone disrupters, dermatitis in perfume) stating that Europe has banned 1,200 chemicals, which the U.S. has only banned 10.