Allsup Applauds the Work of the Invisible Disabilities Association 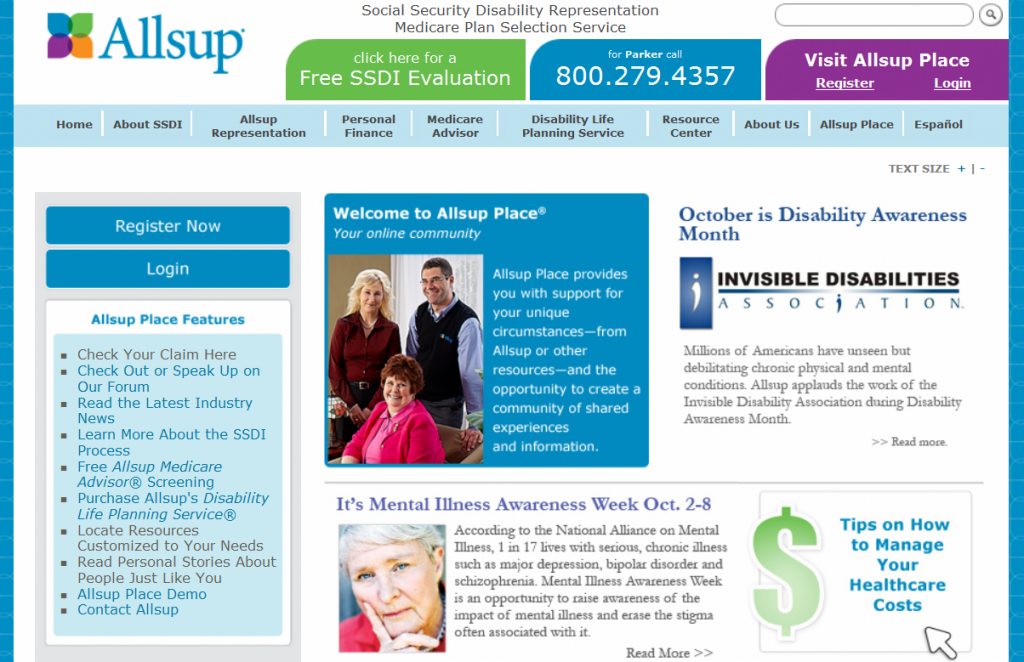 Allsup was a sponsor of the event, which is held each October during Disability Awareness Month. The awards banquet honored individuals and organizations making positive contributions to understanding and treating invisible disabilities.

Millions of Americans have unseen but debilitating chronic physical and mental conditions. These include TBI, PTSD, affective disorders, diabetes, cancer, lupus, Crohn’s disease and fibromyalgia. In addition to enduring life-altering symptoms, many people with invisible disabilities must deal with critical judgments, lack of understanding and discrimination.

Evidence of this was alarmingly clear at the hotel where the banquet was held, when an employee initially refused to allow Montalván’s service dog, a golden retriever named Tuesday, onto the premises. Among other things, Tuesday helps Montalván with balance issues caused by TBI, helps ease anxiety from PTSD and reminds him to take medicine.

“I wasn’t angry, I was indignant,” said Montalván. “There is a difference.” Montalván said he was reacting to something unjust and offensive, and took the opportunity, as he has done so many times before, to educate others about the requirements of the American with Disabilities Act (ADA). [See editor’s note below]

The ADA gives civil rights protections to individuals with disabilities and requires equal access to employment, transportation, public accommodations, public services and telecommunications. The ADA calls for state and local governments, businesses and nonprofit organizations that serve the public, to allow service animals to accompany people with disabilities in all areas of the facility where the public is normally allowed to go.

“I’m an advocate, not an activist,” Montalván said. In addition to a letter of apology, Montalván asked that the entire [hotel chain] train their employees on the requirements of the ADA. After getting a crash course on the ADA, hotel staff welcomed Tuesday and the other service dogs in attendance.

That spirit of advocacy and perseverance was demonstrated throughout the evening as individuals and businesses were honored for breakthrough research, volunteerism, corporate responsibility and innovation in meeting the needs and raising awareness of those with invisible disabilities.

“We cannot always judge whether a person is disabled or not by how they look to us,” said IDA founder and president Wayne Connell. “Someone can have a physically limiting illness or injury, even though it is not obvious to the onlooker. Their limitations may be disabling, but because their symptoms can seem unapparent to most, we call them invisible disabilities.”

Connell said IDA offers individuals support, understanding and the comfort of knowing they are not alone. Like Capt. Montalván, IDA educates and raises awareness of the realities of invisible disabilities to shatter myths and increase understanding.

“Believing a loved one when they say they are sick or in pain is the most important thing we can do,” said Connell. “Just because we can’t see from the outside what they are battling on the inside doesn’t mean it doesn’t exist. Belief, validation and support can give a friend or family member the strength they need to continue the fight.”

The Invisible Disabilities Association is a 501(c)3 non-profit organization based in Parker, Colo., which encourages, educates and connects people and organizations touched by illness, pain and injury around the globe through its website, online social network, literature, projects and seminars. For more information, visit www.invisibledisabilities.org.

Allsup is a nationwide provider of Social Security disability, Medicare and Medicare Secondary Payer compliance services for individuals, employers and insurance carriers. Founded in 1984, Allsup employs nearly 800 professionals who deliver specialized services supporting people with disabilities and seniors so they may lead lives that are as financially secure and as healthy as possible. The company is based in Belleville, Ill., near St. Louis.

For more information and to receive a FREE consultation visit Allsup.com.

[EDITOR’S NOTE: The Marriott Hotel was notified of the arrival of Service Dogs prior to the event and other service dogs were checked in without question. The Marriott Hotel issued a verbal apology immediately and a formal letter was sent to Captain Montalván. The Invisible Disabilities Association also had the opportunity to give a presentation to hotel management and staff, providing education regarding Service Dog and other accessibility laws and other accommodations].

Allsup Applauds the Work of the Invisible Disabilities Association

Six Advantages of Representation for SSDI