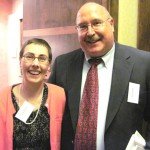 Jane Brown graduated with a Master of Laws in Taxation and worked from 1983 until mid-2007, when she had to leave her career because of Multiple Sclerosis.

The change was quite hard for Jane, so she reached out for support from the Invisible Disabilities Association (IDA). Through IDA’s online social network, Jane found new friends who understood her losses and struggles. She quickly volunteered to be a chat host and a member of the welcoming team. Jane has become a friendly voice and face to others who join the network.

Jane said, “I joined soon after I had to quit work and it saved my life. To this day (over 2 years later) I still maintain friendships that span the country (no, the world) and I continue to host their chatroom 2 nights/week.”

Yet, Jane didn’t want to stop there. She had a desire to meet people in person to not only share lives, but to also share hugs. So, in 2009 Jane took a leap and started a local Meetup group called, “Disabled People Want to Meetup Too!” Last January, Jane told Littleton Independent reporter, Heather Sackett, “My goal when I started was to make just one new friend.”

Little did Jane know, she was not alone! In fact, the group has already grown to over 150 members that meet throughout Denver Metro, with several people who host meetings in their area. They have everything from weekly coffees and regular dinners to an annual picnic.

Now, when a person reads about such a group as this, they may picture in their minds, a somber group of people complaining about their aches and pains. True, they may share their challenges and frustrations; after all, this is a great time for people to discuss their lives with people who genuinely understand what they are going through. Nonetheless, just like Jane, this group is welcoming, loving and fun!

This year, KRKS and KNUS Radio partnered with IDA to request nominations of people in the Denver area for the 2011 Volunteer Award. … Well, you guessed it! Jane Brown was nominated, then chosen from the nominees to receive this award at the 2011 Honor Awards Banquet on October 2nd.

Special Guest Speaker will be New York Bestselling Author, Luis Carlos Montalvan, along with his Service Dog, Tuesday. The Master of Ceremonies will be DJ Rick Crandall of the hit show, the Breakfast Club on KEZW Radio. There will be other amazing award recipients who are making a difference in their communities, who will be honored that night as well.

UPDATE: denverpost.com did a story on Jane and her Meetup group on 12/19/2011, Disabled people find friends through Meetup group. Video below.