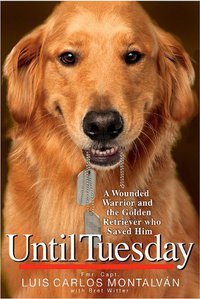 Fmr Captain and New York Times Bestselling Author, Luis Carlos Montalván and his Service Dog, Tuesday spoke at the 2011 Invisible Disabilities Association Honor Awards Banquet in October. Luis is the author of Until Tuesday: A Wounded Warrior and the Golden Retriever Who Saved Him.

Luis shared his amazing story of the war after the war with invisible disabilities, Post Traumatic Stress Disorder (PTSD) and Traumatic Brain Injury (TBI) and how his service dog, Tuesday, has given him hope and healing.

Until Tuesday came into Luis life, he was overwhelmed by his debilitating injuries, memories and could barely leave the house due to Agoraphobia. Tuesday assists Luis with his balance, retrieves things off of the floor, reminds him to take his medications, wakes him up when he is having flashbacks, gets Luis out of the house,  gives him the unconditional love we all need to give us strength and much more.

Luis has been published in The New York Times, The Washington Post, The San Francisco Chronicle, and The International Herald Tribune. Luis and Tuesday’s story has been shared on NPR, CBS, CNN, BBC, C-SPAN, National Geographic and they appeared on the Late Show with David Letterman in July (watch clip on YouTube). Luis is also a recipient of a 2011 VOICE Award presented at Paramount Studios.

Also included in the evening were Denver Radio Personality, Rick Crandall of KEZW, 11 amazing award recipients making a difference in the lives of others. As a surprise to Luis and all of the attendees, Luis was presented with the first ever Invisible Heroes Award!

NEWS!  Until Tuesday to Become a Movie “Waterman Entertainment has acquired the rights to the New York Times bestseller ‘Until Tuesday’ — and has attached ‘Mr. Holland’s Opus’ writer Patrick Sheane Duncan to adapt it…” “Service dogs have played a crucial role in the rehabilitation of many American soldiers, and this film will pay tribute to them as well as the soldiers who have sacrificed so much for our country.” NY Times Bestseller ‘Until Tuesday’ Lands at Waterman Entertainment. The Wrap. October 17, 2011.

ORDER SPECIAL EDITION AUTOGRAPHED copy of Until Tuesday: A Wounded Warrior and the Golden Retriever Who Saved Him. Limited copies available.

The Invisible Disabilities Association is a Colorado-based non-profit organization encouraging, educating and connecting people and organizations touched by illness, pain and disability around the globe. Visit IDA at www.InvisibleDisabilities.org