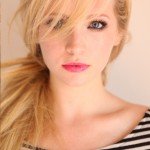 After high school, Accola’s childhood friend Teri suddenly became very ill after contracting Lyme Disease. When Accola learned of this, she did not know much about Lyme.

“Oh, well, I know you get if from a tick so … she’ll be fine. They’ll give her antibiotics … piece of cake.” Liol Magazine

Once Accola learned of the seriousness and complexities of her friend’s illness, she decided to bring awareness to the disease. She said,

“I wanted to help any way that I could to give it [Lyme] a voice and give my friend a voice when she can’t.” Liol Magazine

Accola has since done some Public Service announcements and interviews to help spread the word about Lyme Disease.

Tip of the Day: How to Encourage a Friend with an Invisible Disability Thane’s Battle with Lyme Disease