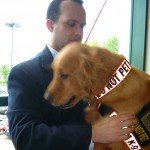 Keynote Speaker for IDA’s 2011 Banquet, Luis Carlos Montalván and his Service Dog Tuesday were on the Late Show with David Letterman in July.

Fmr Capt. Luis Carlos Montalván is the author (with Bret Witter) of Until Tuesday: A Wounded Warrior and the Golden Retriever Who Saved Him. The book debuted on the the New York Times Best Sellers List!

This book is a story about one soldier’s battle after the war, with several debilitating wounds including Post Traumatic Stress Disorder and Traumatic Brain Injury. Until Tuesday came into Luis’ life, he could barely leave the house due to Agoraphobia. Read this incredible, real-life “tail” of how Tuesday rescued Luis and how they are bringing awareness and hope to others living with invisible disabilities!

Luis and Tuesday on the Late Show with David Letterman in July (watch clip on YouTube).

Until Tuesday: A Wounded Warrior and the Golden Retriever Who Saved Him – Book

Until Tuesday: A Wounded Warrior and the Golden Retriever Who Saved Him – Video

What Makes An Animal More Than Just a Pet? Pamphlet from IDA

Mum Discusses Summer Break in Routine for Son with Autism Facing the Mountain of Loss: Losing a Pet