I Resolve to Believe You

Resolve to believe. As yet another year dawns and, of course, I need to make at least one resolution. The good news is that I know I can keep this one. I resolve to believe you! I resolve to listen and acknowledge the pain and illness you live with daily even though your symptoms might be invisible.

For me, the opposite of believing is prejudice. Prejudice defined by Dictionary.com is “an unfavorable opinion or feeling formed beforehand or without knowledge, thought, or reason.” How many times have we been frustrated and impatient as we wait for the person in the crosswalk at the store? They seem to walk so slow and we are in a hurry. Why can’t they speed it up? Maybe they are in chronic pain or have a myriad of other illnesses or injuries that we cannot see. I say that we sure err on the side of caution and belief first, not be suspicious and prejudice.

Or maybe we have seen the person park in a designated Accessible Parking Spot and they exit their car and proceed to the shop or office without using a cane or wheelchair and with no noticeable signs of injury or disability. Many of us have seen the notes left on windshields of people just like this person. The notes are full of anger and mistrust. One example is in the article by Phil Mutz. “A Disabled Veteran Responds to a Nasty Note Left on His Windshield.” Here is another story with the same subject “Note shames mother for using disability parking spot,” by Victoria Sanchez of KUSA. And one more example was written by Parker Lee of the Independent Journal “Someone Left a ‘Faker’ Note by Her Handicapped Tag. Here’s What They Didn’t Know About Her.”

People would question, stare and scream at my wife, Sherri, for parking in “Handicap” parking spaces. Even though she has lived with overwhelming pain, fatigue and neurological symptoms of Multiple Sclerosis and Lyme Disease, diagnosed in the 1991 and 1992 respectively and since the symptoms are not noticeable, people tend to jump to judging her first. Because of her struggles with people understanding her disabilities, Sherri thought the phrase, “invisible disabilities” aptly described the debilitating illness, pain, and injury she battles along with millions of others around the world. 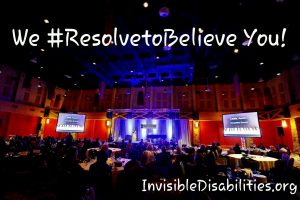 The Invisible Disabilities Association launched 20 years ago in 1996 to use Sherri’s example to help other’s in the battle. One of our first pamphlets was “Don’t Judge by Appearances” addressing the issue of misunderstandings surrounding disabled parking. The last few sentences in the pamphlet are crucial “Therefore, if a person is displaying a license to park in an accessible parking space, try offering a hand, instead of a visual judgment. After all…the people you are graciously intending to defend may be standing right in front of you!”

Yet disabled parking is only one example of the disbelief people have of those living with illness and pain. Oftentimes the person living with illness and pain is misjudged because of their appearance. Sherri was a model, actress and pageant winner before she became sick. She still looks stunning and people tend to disregard when she tells them about the bone-crushing pain, fatigue and brain fog she deals with daily. We wrote the book, “But You LOOK Good: How to Encourage and Understand People Living with Illness and Pain” because people for some reason think their loved ones who look good can’t possibly be sick or at least not as sick as they contend they are.

Creator of the Spoon Theory, well-known author and blogger Christine Miserandino has dealt with this issue as well.  The following is from her website, ButYouDontLookSick.com.

“From the age of fifteen, Christine Miserandino has been diagnosed with a myriad of illnesses from Chronic Fatigue Syndrome to Epstein Barr, and finally, many years later to a determination of Lupus. As though battling a shopping list of symptoms, Christine has consistently been told, by both well-wishers and doctors alike, “But you don’t look sick.” as if that was some kind of compensation for being chronically ill. Many times, being pretty or not sickly looking, made it harder to validate an illness you cannot see.”

Even supermodel and actress, Yolanda Foster has encountered the mistrust of not only strangers but friends and co-workers as well in regards to her diagnosis of Lyme Disease. The following is from the article “’Is this even real?’ Lisa Rinna suggests Yolanda Foster may be faking Lyme disease on The Real Housewives of Beverly Hills” in the DailyMail.com.

“Yolanda Foster has been suffering from Lyme disease, but Lisa Rinna on Tuesday’s episode of The Real Housewives of Beverly Hills showed her skepticism.

Lisa, 52, suggested to Kyle Richards and Lisa Vanderpump that the former model might be faking the symptoms for attention.

‘I feel that Yolanda’s posts on Instagram can be confusing because one minute she’s in a hospital bed with needles in her arm and the next she’s on a yacht looking like she’s having a great time,’ said Lisa.

The Melrose Place actress then read a description of Munchausen syndrome or ‘factitious disorder’ – where people feign illness to gain attention or sympathy.”

The belief that people living daily with illness and pain really just “want attention” is not the truth in most cases. The problem is that disability and pain usually brings abandonment and isolation, not attention. If someone was seeking attention, having an illness or injury would not be the best way to go about it. The loneliness of illness and pain is very real. 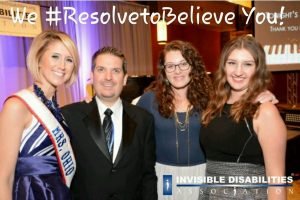 I think of IDA Ambassador and award-winning, singer-songwriter Mandy Harvey. Even though Mandy is profoundly deaf, her voice is clear and beautiful. As a singer, she is often mistrusted because of her deafness. Some people can’t believe that she can sing so incredibly well and not hear what she is singing herself. I have been on radio interviews with Mandy and I can understand why people think the way they do. How can she respond to the interviewer so quickly, she must hear something? Actually, Mandy uses a very cool piece of technology on her phone called Clear Captions. Anytime she is on her phone, the words spoken by the caller are typed on her screen by an individual with Clear Captions and Mandy then responds to the caption. Actually, it is quite exhausting for her to read and respond verbally so quickly. Mandy also reads lips very well.

Just because we may not understand an illness or disability, doesn’t mean we need to disbelieve people living with them. Kara O’Daniel as someone who has also felt the sting of misunderstandings regarding her disability.  Kara’s brother Kyle writes the following about her.

My twin sister, Kara, hasn’t had the easiest go at things over the last 24 years. She has gone through a lot and handled it all with patience and grace. Through all her struggles she has always found a way to be there for others and help as many people as she can.

Her most recent endeavor is a result of this selfless habit; she is starting a career as a motivational speaker, sharing her story with those who need to hear it the most. What is this story, you ask? Well.

It’s a story of 39 surgeries, endless struggles with Spina Bifida, and countless inspiration for all those who are fortunate enough to have Kara as part of their lives.

HER goal is to share her story and advice with those who are in similar situations to those that she has struggled through so many times.

Kara shared with me that her journey with Spina Bifida has been difficult because of the misunderstandings surrounding it. Kara is able to walk because of numerous surgeries and therefore people often don’t believe her. They think that all people with Spina Bifida must be in a wheelchair. This same misunderstanding impacts people with MS. Being in a wheelchair is not always indicative of someone’s disability or even the severity of their disability. Using a wheelchair is because someone is unable to walk, maybe for the moment or maybe all of the time.

I resolve to believe you this year. Let’s believe people first. Let’s not play armchair doctor and think we know. Let’s listen and acknowledge and learn from the people who know best, those who live daily with pain and illness and disability. They are the true experts. Let’s not judge people by how they appear or don’t appear. I love my friend and IDA Advisory Board Member, Peter Strople’s quote “When in Doubt, Love.” Let’s love and encourage and believe people living with illness and pain. Life is struggle enough for them. Let’s not make it worse by our words and prejudice.

Join me this year to resolve TO BELIEVE. Let’s all envision a world where people living with illness, pain, and disability will be Invisible No More!

Copyright 2016 Wayne Connell – This article was first published on Disability.Blog, by Disability.Gov on January 20, 2016.

Wayne Connell, the founder, and president of the Invisible Disabilities® Association (IDA), established IDA 20 years ago in 1996 out of the desire to educate friends and family about his wife’s debilitating illness. Soon afterward, people around the globe began sending emails sharing how IDA had changed their relationships with their loved ones. He is the co-author of the book, “But You LOOK Good, How to Encourage and Understand People Living with Illness and Pain.” Wayne’s background fueled his passion for helping people living with illness, pain, and disability. His experience includes that of a professional, multi-tasking husband caregiver with an extensive background in management, media, and technology. This man on a mission quickly launched IDA into a world-wide outreach for millions living with invisible disabilities.

Make sure you check out IDA’s website for additional resources and stories at www.InvisibleDisabilities.org. Share your personal video story with us at www.InvisibleNoMore.tv. You can also be part of other people’s stories by joining them atwww.Facebook.com/invisibledisabilities or becoming a member of InvisibleDisabilities.Inspire.com. Join IDA at our 2nd annual Brain IDEAS Symposium on August 5, 2016. Celebrate Invisible Disabilities Week is October 16 through 22, 2016 and our 9th Annual Awards Gala, “Jazzed About You,” will be held on October 21, 2016.