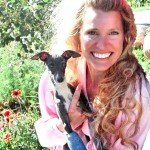 Dr. Diane Dike lives with Cryoglobulinemia, a rare blood disorder that can be very painful, debilitating and life threatening. Seven years ago, when Diane’s condition was greatly worsening, she was told about a doggie that had been in an accident and needed a new home.

Diane and her husband, Paul, went to see this pup with two broken legs and a ripped off tail – it was love at first sight! At the time, they had no idea that this little creature they named Gracie would not only fill their lives with joy, but would also give back in bigger ways they could ever imagine.

It didn’t take long for Gracie to come to life and realize an even greater purpose! Gracie began alerting Diane before she would have an attack, by aggressively licking Diane. The forewarning has allowed Diane to take precautions to help prevent the Cryoglobulinemia from “pooling” the blood in her legs and feet, by raising them. Keeping Diane’s blood warm is also imperative, so Gracie cuddles in Diane’s lap with a nice comfy blanket to warm up her extremities. Diane has also taught Gracie how to retrieve things for her, like her cell phone or keys. After the honing in of Gracie’s natural talents, along with some training for proper behavior in public, Gracie became a full-fledged Service Dog.

With Gracie’s help, once a very athletic and career oriented woman, Diane also found her new purpose amidst her limitations. She became the Founder and President of Second Chance with Saving Grace that reaches out to others in need through hospitals, churches, prisons, orphanages and other groups. Diane was also the recipient of the Invisible Disabilities Association’s Inspiration Award in 2008.

Paul and Diane share an encouraging message about love, giving and how they rescued Gracie, then “Gracie rescued Diane right back!” (PRLog). Their story comes alive in a beautifully illustrated story series book called, The Adventures of Gracie & Diane. Diane has also written an autobiography, God Made Only One of Me.

The trio has enjoyed their lives together as a family, eager to love with the motto “no human or animal left behind.” With Gracie always by her side, Diane’s indelible spirit has uplifted children and adults alike. So many who are living with chronic illness, cancer, history of abuse and more can relate and be encouraged that even with their brokenness, they are loveable, unique and can make a difference in someone else’s life.

“With Dike’s precarious health it would be best for her to stay home, safe in bed limiting the variables that can take her life and limbs. But she’s not going to let what she can’t do keep her from doing what she CAN! Even though she pays a high price for living and giving, she is committed to both. She is strong and courageous inspiring all around her to be the same” (PRLog).

The Dike family has been planning a trip across the country in their recently donated RV, to share their story and hope to many. Sadly, the week before they were to leave, Gracie was diagnosed with Mast Cell Cancer. She had surgery to remove a spot on her ear and tests to see how advanced was. As the doctor was giving the couple the bad news, Diane’s tears began to fall “Yet, Gracie ever on duty, caught each one with a kiss” (PRLog).

Paul and Diane had to wait for the final test results to arrive, before they could leave on their journey. If the tests showed she was in stage one, they would have the green light to continue on their way. If it were stage two, she would need treatment and with stage three the doctor said, “let’s not think about that right now” (PRlog).

The following week, Paul and Diane received the incredible news! Diane exclaimed, “Gracie had stage one Mast Cell cancer but the wonderful Dr. Charlie said they got it all, good job & have a GREAT trip!!!!” (IDA communications).

So, the three will enjoy their Thanksgiving Blessing, with plenty to be grateful for this year and a new lease on their passion to never take anything for granted. They will be leaving soon for their American Missionary Journey going west through Utah then down through Arizona, New Mexico, Texas, Louisiana, Mississippi, Alabama and Florida. To schedule Diane, Paul and Gracie for your church or group, call 303-225-2717 or visit their website.