Have you ever seen someone get out of a car parked in a space reserved for people with disabilities, who did not LOOK disabled? Did it make you feel very uncomfortable or even upset? Did you let them know of your disapproval by giving them a dirty look or yelling at them?

Well, you are not alone. Many people are very disturbed by the sight of a seemingly mobile person taking the space of someone who is truly in need of it. After all, we want to protect the rights of people for whom these spaces are reserved!

However, in our efforts to help those who deserve these parking spaces, we actually may be hurting someone who has a legal right and a legitimate need to park there. How can this be true, you ask? Isn’t it obvious who does and who does not have a disability? 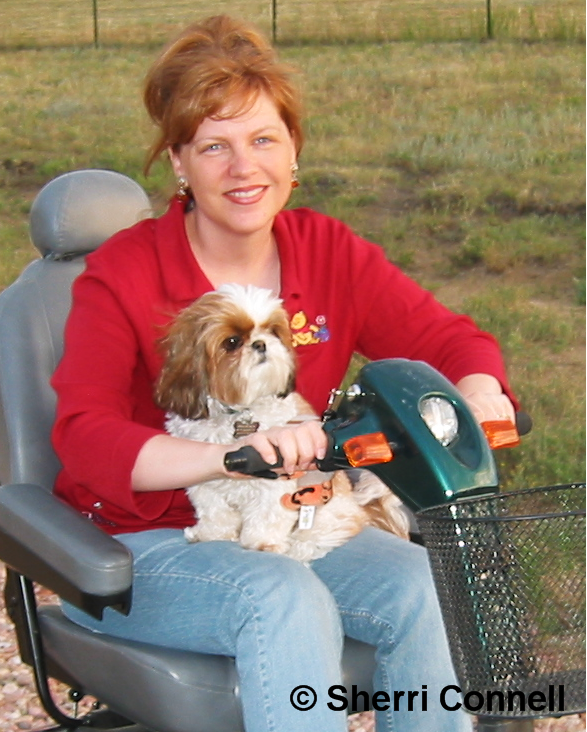 It was a weekend afternoon, and Sherri wanted to head to the department store to pick up some items. She knew that driving would be tough enough, but she felt spending time with her niece would be worth the difficulty of the trip.

Once inside, they looked for an electric motorized cart. They located one and proceeded around the store. Of course, being in her late twenties and looking much younger, Sherri would elicit stares from people wondering why she was using the cart. Some even wondered out loud, especially children who would point and ask “Mommy, what’s wrong with her?”

Why anyone would ride one of the store scooters unless they really needed it is beyond me. Sherri’s scooter at home goes 8 miles an hour and has head lights, tail lights and a headrest. The mall carts crawl along slowly, and everyone stares at you.

Sherri and her niece finished up their shopping and returned to their car. Sherri started the car and looked in the mirror and noticed a police car with its lights flashing right behind her, blocking her in. There was an immediate knock on her window. Startled, she rolled down her window and an officer stated that she was not allowed to park there, because she was not handicapped.

Sherri said that the placard was hers and she handed the officer her license, her placard registration and a multiple sclerosis (MS) card. Sherri mentioned that she had the right to park there, because she was disabled with MS and had gotten approval from her doctor and the motor vehicle department.

The officer replied, “I don’t care how many multiple problems you have, you can’t park there. I saw you walk inside and back to the car, and you looked fine to me.”

After about 10 minutes of trying to explain her disability to the officer, Sherri started to get quite frustrated. She then asked very politely for the officer’s name and badge number, and if he would please move his car. Of course, her nervous system started to work overtime and her brain went into fight or flight mode. Luckily for the officer, he said he would move his car. Then he stated, “See those people over in that Cadillac, they are not handicapped either.

The conclusion of the story is that the officer was eventually reprimanded for the way he was hassling people who had the legitimate right to park in accessible parking.

The general qualifications for accessible parking spaces include those using wheelchairs, walkers, crutches, canes and assist dogs. Nonetheless, most of us do not realize they also include certain impaired functions of the heart or lungs, as well as conditions which are worsened to a specified impairment by walking a certain distance.

People with a variety of disabilities may qualify to park in these spots. Moreover, not all impairments are readily evident to the onlooker. Because of this, we refer to conditions which cause debilitating symptoms that are not so apparent from the outside as “invisible disabilities.”

There are millions of people who are forced to contend with serious illnesses, injuries and circumstances, which have left them with mountains to climb every time they take a step. Most people do not realize a person can have hindrances on the inside, which may not be visible on the outside. Their restrictions may not be conspicuous at a glance, but their pain, limitations and inability to function normally can be debilitating.

What may seem easy to you may seem like a 14,000 foot hurdle to them. Many even collapse in stores, become very dizzy and weak or even black-out. Being able to park close to the entrance of a building when they need to allows them to run an errand they otherwise would not have been able to conquer.

At any rate, the purpose of accessible spaces is to assist those with many types of disabilities and health conditions. For those with various types of limitations, the spots help make it possible for them to shop or visit the doctor.

How do you know who can park in an accessible space and who cannot? Look for a temporary or permanent placard in the front window or a disabled license plate. These items are received after an application, which is completed by a patient’s doctor, is approved by the Department of Motor Vehicles (DMV).

Each state’s DMV has specific guidelines and requirements the person must meet in order to receive a placard or license plate. Most states take into consideration the impairments due to certain conditions, as well as the implications stemming from aggravations of these conditions. Therefore, if a person is issued a license and is displaying it, then they have the legal, medical right to park there.

The following are few assumptions regarding accessible parking:

Drivers cannot request an accessible plate or placard without a form completed by a licensed physician and with their verifiable license number.

Doctors have no personal gain by doing so.

Many people believe this happens often, but do not personally know anyone doing so. At any rate, we cannot assume someone is using a placard that does not belong to them, because they do not “look” like they have a disability.

If someone personally knows an individual who has stolen or borrowed a placard, they can file a complaint with the DMV. If we have further concerns with the application and qualification process, we should consider using the legislative process to address them, rather than confronting individuals in a parking lot.

Chances are the person displaying a placard or plate is in fact parked legally and needs the space for physical and/or medical reasons. As you can imagine, it is difficult enough to live with such illnesses, injuries and disabilities that wreak havoc in one’s life without being harassed every time one needs to go shopping or to the doctor. Finally, if a person is displaying a license to park in an accessible parking space, try offering a hand, instead of a visual judgment. After all…the people you are graciously intending to defend may be standing right in front of you!

By Wayne Connell, Founder and President of the Invisible Disabilities Association

This article was first published on Disability.Blog by Disability.gov. October 31, 2012.

Looks Can Be Deceiving

What’s So Funny About …