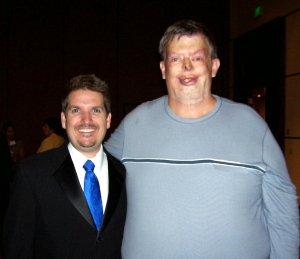 By Wayne Connell, Founder and President of the Invisible Disabilities Association

What is a disability? In general, the term disability is often used to describe a physical or mental challenge. This could be a bump in life that can be managed, or a mountain that creates serious changes and loss.  Either way, this term should not be used to describe a person as weaker or lesser than anyone else!

Every person has a purpose, special uniqueness and value, no matter what hurdles they may face.  Just because a person has a disability, that does not mean they are “disabled. “ Many living with physical or mental challenges are still active in their work, sports or hobbies. Some with disabilities are able to work full or part time, but may struggle to get through their day, with little or no energy for other things. On the other hand, others may be unable to maintain gainful or substantial employment due to their disability, have trouble with daily living activities and need assistance with their care.

According to the Americans with Disabilities Act of 1990 (ADA), an individual with a disability is a person who:  Has a physical or mental impairment that substantially limits one or more major life activities, has a record of such an impairment or is regarded as having such an impairment.

Often people think the term disability only refers to people who use a wheelchair or walker. On the contrary, the 1994-1995 Survey of Income and Program Participation (SIPP) found that 26 million Americans (almost 1 in 10) were considered to have a severe disability, while only 1.8 million used a wheelchair and 5.2 million used a cane, crutches or walker (Americans with Disabilities 94-95). In other words, 74 percent of Americans who live with a severe disability do not use such devices. Therefore, a disability cannot be determined solely on whether or not a person uses assistive equipment.

The term invisible disabilities refers to symptoms such as debilitating pain, fatigue, dizziness, weakness, cognitive dysfunctions, learning differences and mental disorders, as well as hearing and vision impairments. These are not always obvious to the onlooker, but can sometimes or always limit daily activities, range from mild challenges to severe limitations and vary from person to person.

My friend Matt Barrett is a real example of someone living with visible invisible disabilities. Matt is 46-years-old and has battled 11 types of cancer since the age of two, including basal cell nevus syndrome, a genetic form of cancer passed down through his family for six generations. He has had over 1,700 surgeries and has lived with unbearable pain and fatigue for decades.

Matt has also been homeless off and on for much of his adult life. Matt is originally from Grand Junction, Colorado and has also lived in Portland, under a bridge in Los Angeles and in what is called “The Hole” in Seattle. Until a year ago September, he lived for three years in a tent in Tent City 3 in Seattle. He has written a book of poetry about being homeless and a blog, both called A View from the Street.

In addition to the battle of illness and being without a home, Matt has also lived with discrimination that most of us cannot fathom. Due to the surgeries Matt has had on his face, he has endured stares, dirty looks and has even has been asked to leave retail stores because he was “scaring” someone’s child.

You would think after a life of being treated this way, that Matt would be a bitter and angry person. However, those who take the time to get to know him find that he is a very kind, loving and giving man. What’s more, they are inspired and their lives are deeply enriched.

In 2011, freelance photographer Ilona Berzups was so moved by Matt’s story that she embarked on a photo essay project called, “Walking with Giant – One man’s battle with homelessness and debilitating illness.” (Matt’s nicknames are “Gentle Giant” and “Bear” because at 6’ 5”, he towers over most people.)

Also in 2011, Matt was determined to travel to Colorado to attend the Invisible Disabilities Association’s Awards Banquet and to spend time with a fellow high school classmate – my wife, Sherri.  Matt has wanted to attend for many years. After getting more bad news from his doctors about the tumors in his brain, he almost canceled. However, once you know Matt, you know that nothing was going to stop him from coming to Colorado. (He attended this past October for a second year as well).

When we found out Matt would be joining us in person, we immediately re-arranged the evening’s schedule and invited him to be a surprise Special Guest Speaker. Karyn Buxman, IDA Advisory Board member, National Hall of Fame speaker and nurse, gave a brief introduction as Matt approached the stage. Just a small glimpse into his life drove the attendees to their feet when he stepped up to the podium.

Matt briefly shared about his journey and appreciation for IDA’s compassion, awareness and support for him and for others. There was not a dry eye in the house, as lives were changed by Matt’s incredible lifelong story of perseverance in the midst of incredible hardship and pain.

By sharing Matt’s journey, our hope is that his struggles, pain and sheer courage will help us all to look beyond our preconceptions. Let’s not judge others by the way they look on the outside. Instead, let’s give love to one another and find out what they have been through, what they need and who they are on the inside.

Unfortunately, people often do judge others by what they see and jump to conclusions about what they can or cannot do. This can be equally frustrating for those who may appear unable, but are perfectly capable, and those who appear able, but are not.

The bottom line is that everyone with a disability is different – sometimes visibly, sometimes invisibly and sometimes both. They have varying challenges and needs, as well as abilities and attributes. Thus, we all should learn to listen with our ears, instead of judging with our eyes. Let’s learn to envision a world where people living with illness, pain and disability will be Invisible No More! 2013 here we come!

This article was first published on Disability.Blog by Disability.gov. December 21, 2012.

Looks Can Be Deceiving

What’s So Funny About …

A View from the Street. Blog by Matt Barrett

More Articles About Matt on IDA