Brain IDEAS: It’s All in Your Head

I’ve noticed one thing everyone is talking about nowadays is the brain. Sometimes the discussion centers on frontal lobes, brain stems, neurological pathways and wiring and firing. Other times we are in search of finding out if we are right-brained or left-brained.

According to the theory of left-brain or right-brain dominance, each side of the brain controls different types of thinking. Additionally, people are said to prefer one type of thinking over the other. For example, a person who is “left-brained” is often said to be more logical, analytical, and objective. A person who is “right-brained” is said to be more intuitive, thoughtful, and subjective.

On a recent assessment, I scored 52 percent left-brained and 48 percent right-brained. I guess that makes me pretty even in regards to logical thinking versus intuitive thinking; maybe I’m neither logical nor intuitive (don’t ask my friends).

Of course, we have come a long way in the science of studying the brain. Technology such as MRIs, CAT scans, PET scans, functional MRIs and SPECT scans have led to amazing discoveries concerning how the brain operates and functions. And our search is not just because we are curious about how our brains work and why thinking, both consciously and unconsciously, is something to ponder.

Sometimes my wife, Sherri, is amused when I get excited and exclaim that my brain helped me solve some problem. Silly me, I am my brain or, at least, my brain is part of me. Hopefully you are not too confused yet. Most of the time brain science seems like science fiction. Invisible Disabilities Association (IDA) advisory board member and 2009 IDA Research Award Recipient Bob Cocke, Ph.D., is the former chairman of the Mind Science Foundation. As a pyschoneuroimmunologist, Dr. Cocke studies how the brain helps in the healing of illness. Pretty heady stuff (pun intended).

I think the search for answers is because so many illnesses and injuries impact the brain itself. As noted in my blog, It’s All in Your Head, many illnesses really are all in your head, like mental illness, autism, Alzheimer’s, stroke, post-traumatic stress disorder (PTSD) and traumatic brain injury (TBI), to name a few. Our mission at IDA is to encourage, educate and connect people and organizations touched by illness, pain and disability around the globe. Because of the focus on the brain due to people’s health, we decided to host our first-ever Brain IDEAS Symposium in Denver, Colo., on Oct. 23, 2015. IDEAS stands for Invisible Disabilities Education and Support. And there are many ideas surrounding the brain.

The New York Times bestselling author of “The Brain’s Way of Healing” psychiatrist and psychoanalyst Norman Doidge, M.D., was interviewed by Mark Colvin of ABC News in Australia and discussed the brain in regards to chronic pain:

When we have pain, there’s acute pain, and acute pain is something that originates in the body and it’s a system that’s telling you, “This is causing harm to my body, don’t do that movement.”

And then there is something called chronic pain, which occurs when there is damage not only to the body, but to the nerves and the brain systems that are involved in pain.

Let’s talk about someone who’s got a nerve in the back that’s being impinged on. Initially, that nerve fires an acute pain when you move in the wrong position. But if there’s a disc collapse or something like that, it keeps sending a signal to the brain: don’t move, don’t move, don’t move.

And the problem is, neurons that fire together wire together, that’s one of the laws of plasticity. So over time, the brain gets better at detecting that pain.

And what often happens is that twinge of that nerve will lead to a pain signal that lasts longer than it originally did in the initial acute pain, and it will often spread out so that it is felt over more of the body.

And at that point, you’re developing a chronic pain syndrome, and if you look at the brain under a brain scan, if during the acute pain period you have pain, you’ll see perhaps up to a dozen areas of the brain light up with little pinpricks.

Once it becomes a chronic pain situation, the same areas are lighting up, but instead of being a pinprick, it’s like supernovas of activity. And so that’s… chronic pain is basically plasticity gone wild.

This is a sensory problem, where you’re so good at sensing pain, that’s it’s out of control. So if you or a person develops a chronic pain syndrome, there are techniques in this new book that talk about how to use the competitive nature of plasticity to wind that back.

Discoveries are happening daily on how the brain can now be retrained, which was once thought to be impossible. John Arden, Ph.D., psychologist and author of “Rewire Your Brain” discussed with Rebecca Aponte of psychotherapy.net how we can think and behave our way to a better day:

Let me give a fairly common example. Say you have a client who says to you, “I just don’t know why in the first part of the day, when I lie there in bed, I get so overwhelmed and I get paralyzed with this totality of anxiety. I don’t know what’s going on there. I get anxious and depressed. What am I going to do?”

Now, how to get out of that? You’ve got to do what are called approach behaviors. The CBT people have known this a long time—it’s called behavior activation. What do you do with depressed clients? Do you sit around and analyze things to death? No, you get them doing stuff. And you get them doing it quick. As soon as you start to feel overwhelmed, it’s time to do something, because that kindles the left prefrontal cortex, which is about approach behaviors. But you do it incrementally, because it’s always very overwhelming to do big, big projects.

Behavior changes the brain and the brain changes behavior. It’s a bidirectional flow of information. It’s not one way or the other.

It is a very exciting time for those who live with the invisible symptoms of illness, pain and injury as new scientific discoveries lead to better and more precise diagnoses and treatments. Our Brain IDEAS Symposium is a place to learn about some of them from amazing experts. The day’s discussion will center around three areas: brain disorders, brain health and brain therapy.

So why Brain IDEAS? We want to share that there is hope and more coming soon for so many who live invisible daily with chronic illness and pain. We look forward to a world where they will be invisible no more! Won’t you come join us?

Sally Spencer-Thomas, Psy.D., and CEO of the Carson J Spencer Foundation will discuss mental illness and its role in suicide. 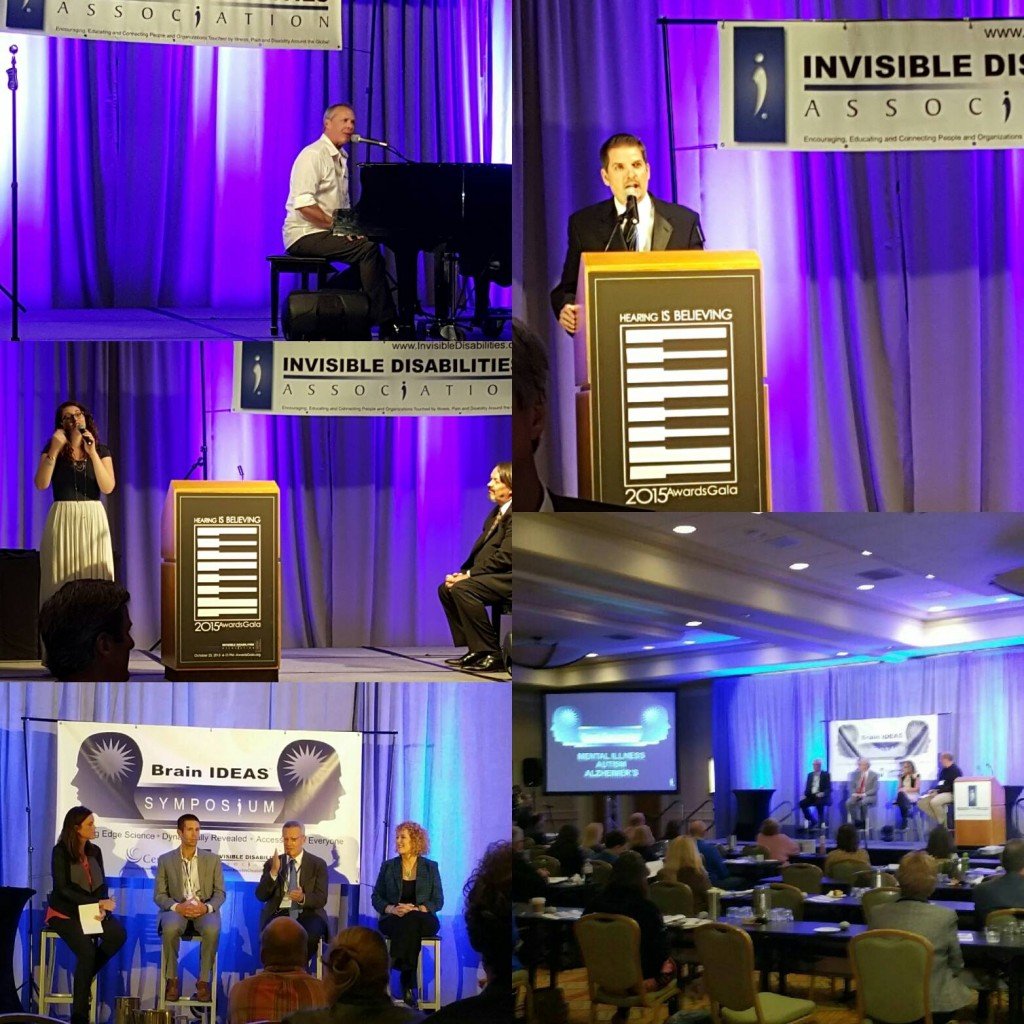 Integrated Listening Systems’ Clinical Director and Advanced Trainer Ron Minson, M.D., will look at how new techniques with music and motion can better help the lives of those living with autism. Huntington Potter, Ph.D., director of the Rocky Mountain Alzheimer’s Disease Center at the University of Colorado and 2015 IDA Research Award recipient will amaze us with his discovery of a link between Alzheimer’s and Down syndrome. The first session will end with an expert panel discussion led by IDA executive board member Jeff Vankooten.

The second section will be lead by Nutrition Education Specialist at Natural Grocers, Jon Clinthorne, PhD, as 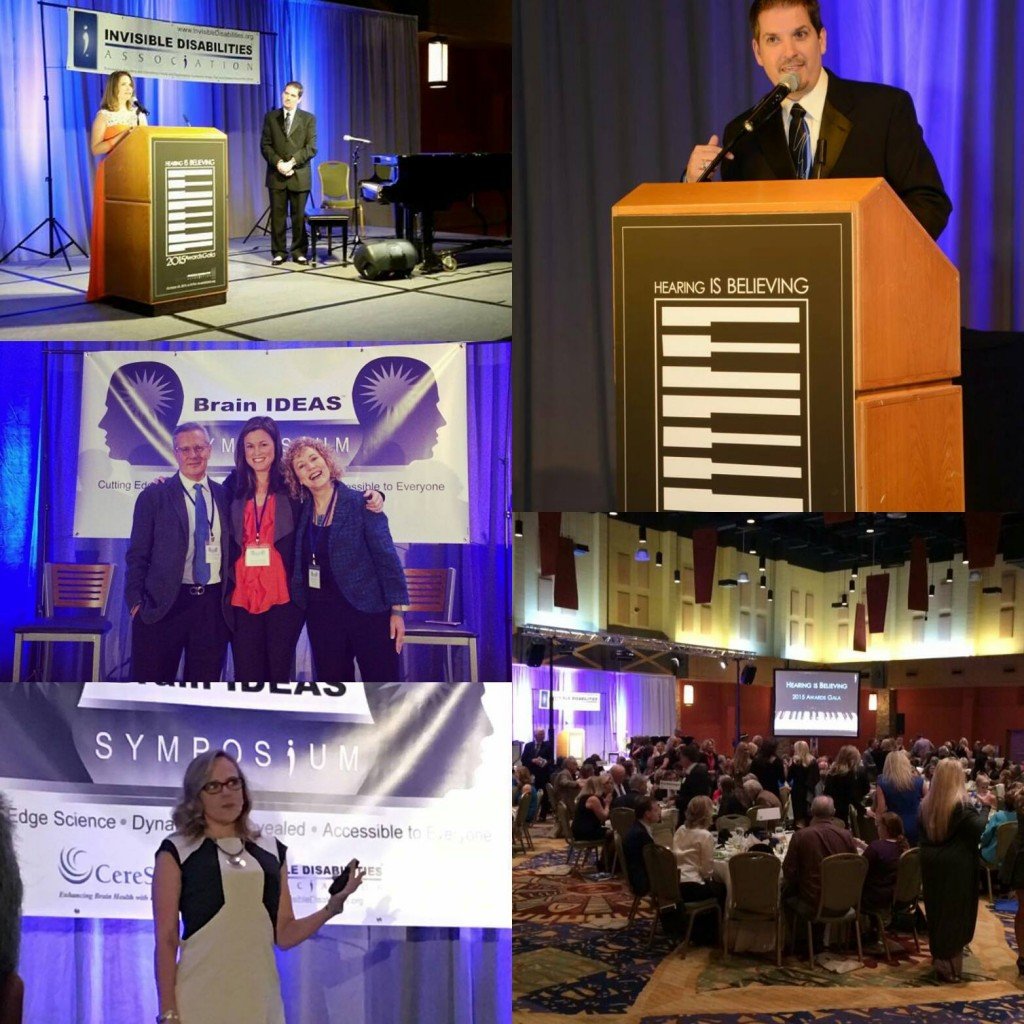 he discusses how to recover from a head injury with the use of nutrition. Renowned expert in the field of integrative neuroscience, founder and CEO of Brain Resourceand 2015 IDA Innovation Award recipient Evian Gordon, Ph.D., M.D., will discuss the benefits of online brain training via My Brain Solutions. Neurohumorist, director of training at SYNERGY and IDA advisory board member Karyn Buxman, RN, MSN, CSP, CPAE, will demonstrate in real time how the power of humor helps in having a healthy brain. Heidi Hanna, Ph.D., founder and CEO of SYNERGY, will provide a guided panel discussion of the experts in this section.

Brain therapy will be the last section to showcase the latest in cutting-edge science, dynamically revealed and accessible to everyone. As the founder of START Active Recovery, Karen Custer will share the latest techniques in training the brain to aid in recovery from stroke. Celebrated psychologist, speaker and author of the EMDR Toolbox: Theory and Treatment of Complex PTSD and Dissociation Jim Knipe, Ph.D., will share success stories with the use of Eye Movement Desensitization and Reprocessing (EMDR) in treating PTSD. Rick Fort PhD, Chief Science Officer for CereScan, will share how, through the use of highly accurate brain scans and technology, better diagnosis and treatment can be found for those who have suffered a TBI. The panel of therapy experts will be moderated by Josh Rizzo, co-founder and executive director of PTSD United and recipient of the 2015 IDA Invisible Heroes Award.

The lunch program will highlight two honor awards and the incredible guitar playing of Billy McLaughlin who, because of focal dystonia, has created a whole new way of guitar playing. Immediately following the symposium on Oct. 23 is IDA’s 8th annual Awards Gala, Hearing is Believing, featuring recording artist and composer Derek Amato who, due to a head injury, became one of only 30 people in the world with acquired savant syndrome.

Copyright 2015 Wayne Connell – This article was first published on Disability.Blog, by Disability.Gov on August 20, 2015.